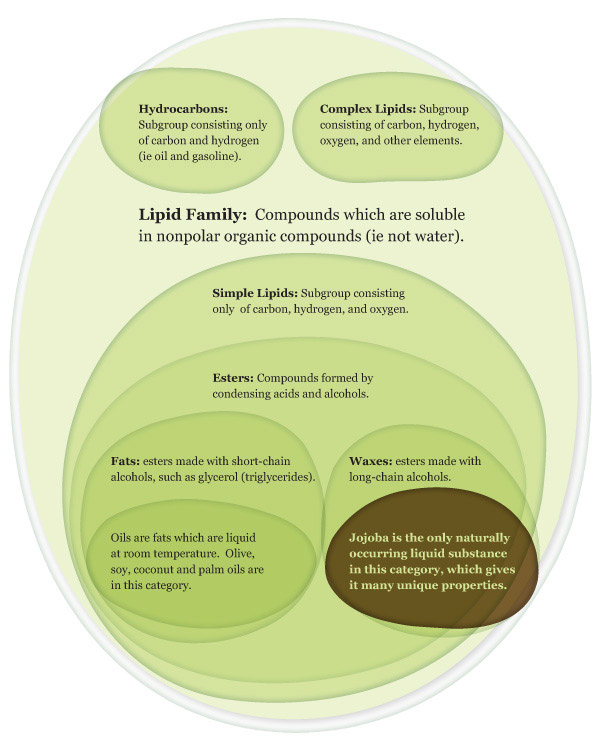 Jojoba is chemically classified as a wax ester, setting it apart from the vast majority of vegetable oils, which are classified as fats (triglycerides). This wax is what the plant uses to protect its own skin. This simple difference is the reason why jojoba is readily absorbed into skin and hair—and why its moisturization is superior. Its chemical structure also explains its oxidative stability that makes it easy to use in cosmetic formulations.

Jojoba is part of the lipids family, specifically classified as a simple lipid. Simple lipids are those that are formed by condensing an acid molecule and an alcohol molecule. The alcohol molecules in joboba are long chain, which means that they have many carbon atoms that are held together in chains; typically, these chains range from 40-42 carbon atoms, which qualifies it as a wax.

This means that jojoba is not chemically an oil, though it is often referred to as such. However, to remain true to its chemical structure that makes it so unique, we do not refer to it as such. Wax esters, such as jojoba, are used by both plants and animals as protection, moisture control, and emmoliency; that means that they make a higher quality skin product than those that are oil based. 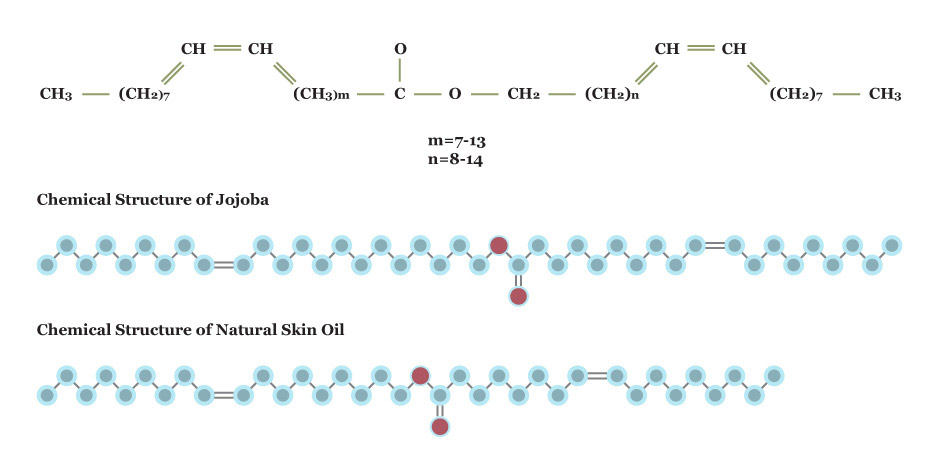 Jojoba also has a high level of oxidative stability. This means that its shelf life is naturally long and does not require the use of preservative, nor do its favorable qualities weaken with time. Products that do turn rancid, through a process called autoxidation, do so due to the effects of free radicals; these are known to cause wrinkles and premature aging. Jojoba naturally combats this process by resisting oxidation through its antioxidants.

Jojoba is also less reactive at the molecular level than the typically used plant oils. When looking at a jojoba molecule, you will see that the double bonds are spread far apart and equidistant from the center. In other plant oils, they are close to one another, separated by only a few atoms. Double bonds that are close to each other are weaker than those spread further apart, and also more apt to attract free radicals. This makes oils with these types of double bonds poor protection for the skin.  It also makes Jojoba easier to manipulate than many other plant oils. 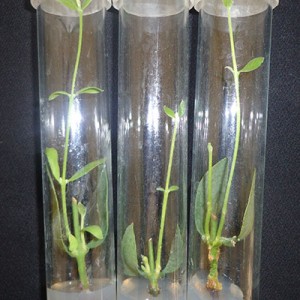 Jojoba has an extremely high level of oxidative stability, meaning it can have a long natural shelf life without the addition of any preservatives and without losing any of its favorable properties. Triglyceride fats and oils from plants and animals, on the other hand, rapidly become rancid (develop foul odors) unless preservatives are present.

In general, rancidity stems from a chemical process called “autoxidation,” which is caused by the presence of free radicals in the substance. Free radicals are known to cause wrinkles and premature aging and thinness in skin. They attack your skin on the cellular level, and can cause mutations which can even be cancerous.

In this chain reaction, a free radical reacts with one of the substance’s molecules to form hydroperoxide and another free radical, which in turn accelerates the process. The hydroperodixes themselves, and the products which result from their decomposition, are foul smelling and can be toxic to the skin’s chemistry. Jojoba combats free radicals and is resistant to oxidation because of the natural presence of antioxidants on jojoba, as well as jojoba’s molecular configuration.

While research has shown the presence of compounds called tocopherols, which eliminate free radicals, scientists also believe another, more powerful antioxidant may be present in order to account for jojoba’s incredible natural oxidative stability.

Double bonds interact with each other and attract free radicals, and therefore two or more double bonds in close proximity result not only in weaker bonds, but bonds more attractive to attack by free radicals. While it may be good for a molecule to be easily broken down if that molecule is used to provide energy (as most fats and oils are), that characteristic makes a substance a poor protector and moisturizer for your skin.

Suitability for Use in Cosmetics

Most of today’s cosmetics make use of modern chemical processes to increase the oxidative stability (uniformity and shelf life) of products. These processes include use of emulsification technology to produce stable combinations of water and lipids to increase product functionality and diversity. A second is the well known process of using petroleum refining technology such as distillation towers to produce hydrocarbon oils such as mineral oil and paraffin wax.

However, consumers today are increasingly demanding reduced use of chemical and petroleum compounds and a greater emphasis on natural ingredients. Cosmetic manufacturers face the challenge that most of these natural ingredients quickly become rancid and develop odors without addition of preservatives.

As discussed in the previous section, jojoba’s oxidative stability make it an ideally suited for the role of natural replacement.
Jojoba is also ideally suited to cosmetics from a manufacturing perspective. Jojoba’s specific properties do not vary from year to year or lot to lot, which means once a manufacturer has developed a specific formulation s/he does not need to worry about making minor adjustments every time a new shipment is received.

Unlike some competitor oils, jojoba does not contain any hydrocarbons (mineral oil) and very few triglycerides. Jojoba has a very low acid value, peroxide value and moisture content. Click here to see a table containing all the pertinent properties of jojoba.

Hydrogenation is commonly used with vegetable oils and fats because it increases the melting point of the substance, which is why liquids oils become semi-solids at room temperature.

This is often desirable because it increases the stability (shelf life)of the substance, and because the way the hydrogenated fat mixes with flour produces a more desirable texture in a baked product.

A negative consequence of hydrogenation is that most oils become greasier and heavier. However, when jojoba is hydrogenated, it becomes a lustrous, pearly white crystalline wax which has a melting point of approximately 70° C (158° F). This makes hydrogenated jojoba one of the hardest waxes in existentance. Only carnauba has a higher melting point, but carnauba’s yellow and amorphorous structure may make it less attractive for use in some cosmetics.